AI systems are not eliminating the need for humans in the workplace, write Daugherty and Wilson. Rather, they are amplifying our skills and collaborating with us to achieve productivity gains that have previously not been possible.

The key to understanding AI’s current and future impact is its transformation of business processes.

A widespread misconception is that AI systems, including advanced robotics and digital bots, will gradually replace humans in one industry after another. Self-driving vehicles, for example, will one day replace taxi, delivery, and truck drivers. That may be true for certain jobs, but what we’ve found in our research is that, although AI can be deployed to automate certain functions, the technology’s greater power is in complementing and augmenting human capabilities.

And humans are doing what they do best: resolving ambiguous information, exercising judgment in difficult cases, and dealing with dissatisfied customers. This kind of emerging symbiosis between man and machine is unlocking what we have called the third wave of business transformation.

To see how we got here, it helps to understand some historical context. The first wave of business transformation involved standardized processes. This era was ushered in by Henry Ford, who deconstructed the manufacture of automobiles so that they could be made on an assembly line. Each of those steps in that overall process could then be measured, optimized, and standardized to achieve considerable gains in efficiencies. 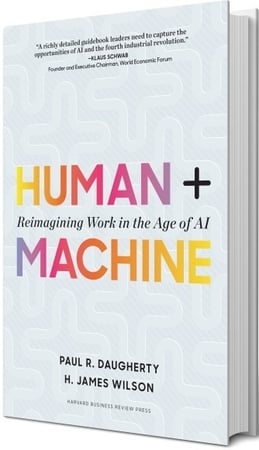 The second wave consisted of automated processes. This era emerged in the 1970s and peaked in the 1990s with the business process re-engineering (BPR) movement, thanks to advances in information technology (IT): desktop computers, large databases, and software that automated various back-office tasks. Among other companies, retailers like Walmart rode this wave to become worldwide powerhouses. Other firms were able to reinvent themselves. UPS, for example, transformed itself from a package-delivery service to a global logistics company.

Now, the third wave involves adaptive processes. This third era, which builds on the previous two, will be more dramatic than the earlier revolutions enabled by assembly lines and digital computers and will usher in entirely new, innovative ways of doing business. As we note throughout our book, the leading firms in many industries are now reimagining their processes to be more flexible, faster, and adaptable to the behaviors, preferences, and needs of their workers at a given moment. This adaptive capability is being driven by real-time data rather than by an a priori sequence of steps. The paradox is that although these processes are not standardized or routine, they can repeatedly deliver better outcomes. In fact, leading organizations have been able to bring to market individualized products and services (as opposed to the mass-produced goods of the past), as well as deliver profitable outcomes.

Unfortunately, popular culture has long promoted a man-versus-machine view—think of movies such as 2001: A Space Odyssey and the Terminator series. The idea of intelligent machines as a potential threat to mankind has a long history and has resulted in many executives adopting a somewhat similar perspective, thinking exclusively of machines as threatening to replace humans. But that view is not only woefully misguided; it’s also perniciously shortsighted.

The simple truth is that machines are not taking over the world, nor are they obviating the need for humans in the workplace. In this current era of business process transformation, AI systems are not wholesale replacing us; rather, they are amplifying our skills and collaborating with us to achieve productivity gains that have previously not been possible.

The third wave has created a huge, dynamic, and diverse space in which humans and machines collaborate to attain orders-of-magnitude increases in business performance. We call this the “missing middle”—“missing” because almost no one talks about it, and only a small fraction of companies are working to fill this crucial gap.

In the missing middle, humans work with smart machines to exploit what each party does best. Humans, for example, are needed to develop, train, and manage various AI applications. In doing so, they are enabling those systems to function as true collaborative partners. For their part, machines in the missing middle are helping people to punch above their weight, providing them with superhuman capabilities, such as the ability to process and analyze copious amounts of data from myriad sources in real-time. Machines are augmenting human capabilities.

In the missing middle, humans and machines aren’t adversaries, fighting for each other’s jobs. Instead, they are symbiotic partners, each pushing the other to higher levels of performance. Moreover, in the missing middle, companies can reimagine their business processes to take advantage of collaborative teams of humans working alongside machines.